Who are the Comfort Women?

During World War II, girls and women, called Comfort Women, were forced into sexual slavery by the Japanese military. Many of the women were from Korea, China, Japan and the Philippines, but there were also women from Thailand, Vietnam, Malaysia, Taiwan, and Indonesia, as well as from other territories occupied by Japan. The exact number of Comfort Women is still being debated over, but the estimates are as low as 20,000 to as high as 410,000. Young women were “collected” by the military, often at gunpoint. Some were falsely promise work in factories and restaurants All were taken to “Comfort Stations” where they were raped up to and exceeding 30 times a day by soldiers, officials, and sometimes, even the doctors. Later, most of them were unable to conceive children, due to the disease, injury, and Mercury 606 that was injected into them to get rid of their sexually transmitted infections. Stations were located in Japan, China, the Philippines, Indonesia, Thailand, Hong Kong, and Macau, among other places. 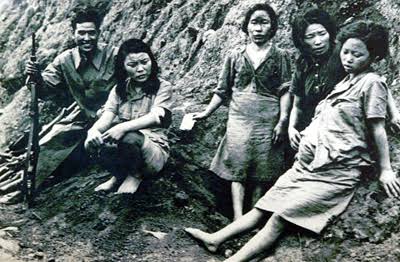 Where are the Comfort Women?

Many Comfort Women died due to sexual trauma, or sexually transmitted diseases, and many have not stepped up to share their story, because of the shame that was deeply associated with the loss of sexual purity, not to mention psychological trauma. Right now, there are 7 Comfort Women residing in the House of Sharing in Korea, a safe haven for the “halmonies” or “grandmothers” as they are affectionately called, where they are understood, accepted, and cared for by a myriad of volunteers. There used to be 14 halmonies living at the House of Sharing, but 7 of them passed away, much to the grief of their families, volunteers, staff, and other people who were touched by them and their situation.

Every Wednesday, since 1995, the Korean Comfort Women and their supporters have been protesting in front of the Japanese Embassy in Seoul. They want the Japanese Military Government to: 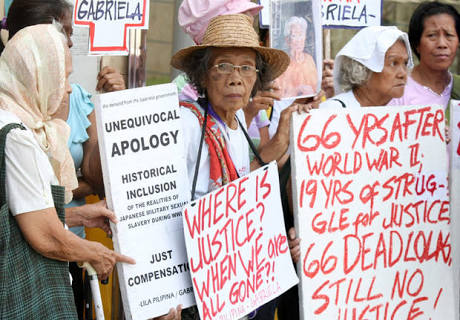 To this day, the Japanese Military Government has not apologized for it’s actions and has not provided the Comfort Women, or their families, with compensation for their wrongdoings. Furthermore, they continue to deny that the Comfort Women were abducted and deny ever having forced a woman to go to a comfort station. Japanese leaders have said that their formal apologies and have offered to set up a $1 billion fund for victims. However, many Koreans think that those actions are not enough and surviving Comfort Women have rejected the fund because it was to be financed by private money, instead of government money.
(Source: http://www.nytimes.com/2012/05/19/nyregion/monument-in-palisades-park-nj-irritates-japanese-officials.html?_r=0)

What is the Comfort Women Memorial?

On October 23, 2010, a memorial for Comfort Women was erected in Palisades Park, NJ in a small park. The memorial consists of block stone with a brass plaque on it, which reads, “In the memory of more than 200,000 women and girls who were abducted by the armed forces of the government of Imperial Japan. 1930;s-1945. Known as “Comfort Women.” They endured human rights violations that no peoples should leave unrecognized. Let us never forget the horrors of crimes against humanity.” Recently, during the month of May 2012, two Japanese delegations visited the Mayor and Council of Palisades Park to discuss the removal of the memorial, the second consisting of members from the Japanese Parliament, in exchange for the planting of cherry trees in the Borough of Palisades Park and the donation of books to the Palisades Park Public Library, among other things. They claimed that that all of the information on the plaque was wrong and that it should be removed so that there would be no animosity in the relations between Japan and South Korea. The Mayor and Council rejected the request. The second delegation, held on May 6, was also met with a similar answer. Mayor Rotundo recalls saying, “We’re not going to take it down, but thanks for coming.”

Latest posts by 더굿리뷰 (see all)